PrinterEmulator (available on Google Play) for Android enables you to convert your tablet to an order printer by emulating a thermal printer and displaing printouts on the screen so you can virtually print on the tablet. In this way printouts appear on your tablet so you can manage them easily. 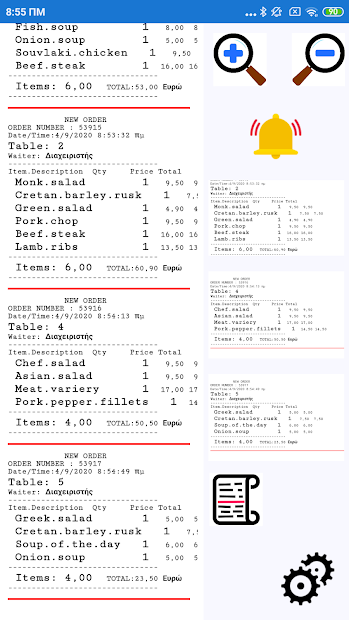 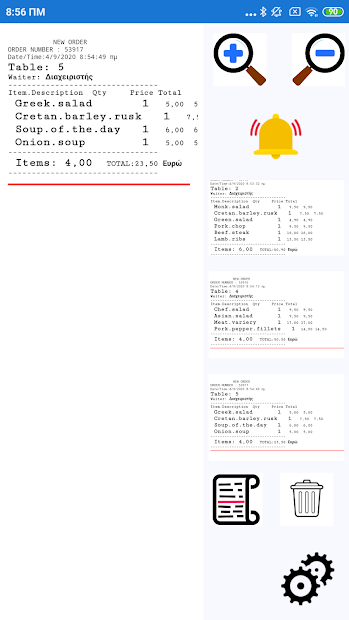 Convert your tablet to an order printer by installing PrinterEmulator (available on Google Play) on your tablet. This will enable it to connect to restaurant ordering systems an an thermal printer compatible to EPSON (esc/pos standard). PrinterEmulator is compatible with any character set. Additionally, it can show bardcodes, qrcodes and images like a real printer. Printouts are separated by a red line at the paper cut point.

Printout management is really easy. Printouts appear either one below the other or as thumbnails on the right of the screen. By selecting a thumbnail, the corresponding printout appears on the main view area. If you want to delete a printout from the list (for example a completed order), you just tap the garbage bin. From the list icon you can return toy default viewing of printouts with one below the other.

From settings you can easily get the IP address of your tablet so you can connect it to the restaurant ordering system (for example OrderFAST) in the place of a real printer. You can also change the default printing port (9100) if required. Additionally, you can select the required character set (for example Windows-1252), the number of printouts you want to track in the list and the time for which the new printout alarm should appear.